amy@ahcow.com
You are here: Home » News » KNOWLEDGE » How to make a paper cup？

How to make a paper cup？

Here, you will find a very easy way to make a paper cup, but it's not just a few folds because it usually leaks in a few seconds after pouring in water.

how to make a paper cup that stands?

First, choose paper with moderate hardness and thickness. If the paper is too thick and too hard, it may be difficult to stick firmly. If you use the origami method, then you only need a square piece of paper and the folding method. If it is to make a disposable coffee cup like a purchased one, it may need to be cut and pasted to achieve it.

Because the bottom side of the paper cup will show a downward arc under the action of gravity., the bottom of the paper cup must be relatively hard.  Therefore, it is necessary to increase the hollow part of a certain height. Will stand very steadily.

How to make a paper cup that holds water?

The first is the water resistance of the paper, and then whether the seams are tight. Paper waterproofing can be made with waterproof paper or after the paper cup is made, oil is used to "coating" the inside of the paper cup. In this way, the time for the paper cup to not be soaked and damaged can be prolonged. And after the fun-filled hands-on, do you consider a small experiment about water storage? For example: Why does a paper cup not burn with water in it? After the simple hands-on exercise this time, the child not only knew the process of making paper cups, but he also had a new understanding of the use of disposable paper cups and environmental protection. And he may also understand the knowledge of burning point :)

How to make a paper cup? 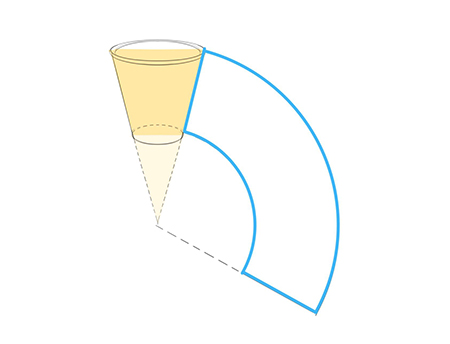 Then paste each small piece of the base on the paper with adhesive tape as shown in the figure. In this way, each small piece is posted in order. The paper is rolled into the shape of a cup. Finally, glue the joints of the cup body to form a cup. 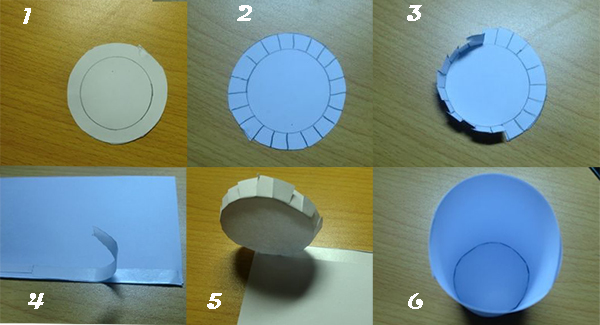 Let your child give full play to his hands-on and observation abilities, you can give him a paper cup for him to observe, and then make one by himself. This is what you will find that there are many subtleties in some ordinary things. The bottom of the paper cup generally has a part of the empty layer, and the mouth of the paper cup is rolled up. Then we can take a look at how a paper cup manufacturer produces a paper cup.

The production process of paper cups

The production process of the hot drink cup is more complicated than that of the cold drink cup, with a few more steps. It not only has to resist hot water soaking and not become soft and soak in a short time, but also ensure adequate health. Relatively speaking, the production steps of cold drinks are simpler, and they can be directly printed, die-cut, and moulded. The surface can be sprayed with food wax, and if the hot drink cup is sprayed with food wax, it is likely that the food wax will melt due to the hot drink, which may cause harm to human health. Therefore, hot drink paper cups should use flexographic water-based inks, and at the beginning, the paper cup base paper is coated to achieve the purpose of waterproof and water-proof. In addition, it can be formed during the production of paper cups.

Start with a thin layer of plastic-coated paper. First, the width of the paper is processed, which is determined according to the face and the way of the printing plate. It is unfolded on a printing machine, and the paper passes through the printing machine in a continuous state like a printing cylinder. There are two types of printing: offset printing and rubbing printing.

After these fan-shaped paper sheets are cut, they are transported and automatically dropped into an automatic stacker, where they are neatly arranged into piles of paper sheets. 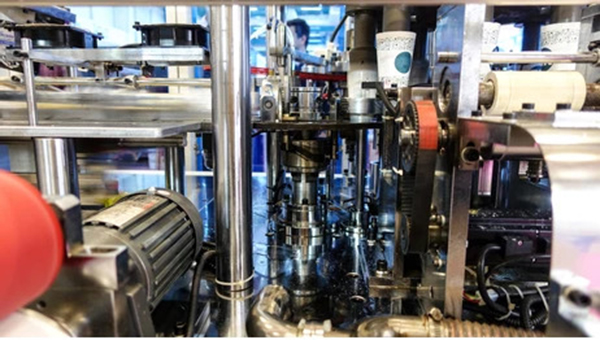 Next is the process of bonding and molding. The fan-shaped paper sheets are butt-bonded to form a cup without a bottom. The bottom of the paper cup is cut by a machine into round pieces of paper, and the round pieces of paper are squeezed by the machine to form a high disc shape, which is convenient for docking with the cup body. Generally, paper cups achieve the function of heat sealing and bonding by melting the plastic substrate at the bottom of the cup body where the paper is printed.